Emma Batten Author
The Artist's Gift - A sequel to Secrets of the Shingle and Stranger on the Point. 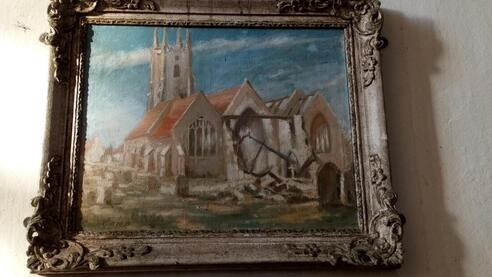 Inspired by a painting of Lydd Church after it was bombed, as well as photos and reports of the event, the novel starts on that fateful day in 1940 and goes through to the end of WW2. Real wartime events are seen through the eyes of fictional characters and readers can follow the lives of Alice, Emily and Lily, as well as being introduced to new characters. This time it's Helen, Alice's Granddaughter and Lily's niece, who is the central character, but of course the war dictates the plot.

With thanks to Zoe Beardsley (Greatstone Art) for creating the stunning painting for the cover.
Here Helen is visiting Dungeness and helping with the daily chores:
As Helen walked across the shingle, she paused on hearing the familiar sound of a miniature steam engine approaching. She eyed it with mild curiosity: like an armoured beetle, it moved at a steady pace, its destination guided by iron tracks. As children, there had been some competition among her and her cousins to be the first to guess the name of an approaching train correctly. It had been the first stage of a day trip to New Romney: the glimpse of an approaching one-third size engine with its ribbon of small coaches – then waiting for it to approach near enough for the colour and details to come into focus. Helen had always paused, not called out random names, until she was almost certain of the engine.
Had she been in a group and not alone, there would have been no competition. Only Hercules served the light railway now and this was not the engine Helen knew. This was Hercules in her suit of armour, not with coaches of tourists but with two specially designed wagons, one before and one behind the engine and her tender. And from these wagons guns poised, pointing upwards. The railway, built by an eccentric millionaire, now played its own part in the war since being requisitioned in 1940.
Hercules moved on, her pace steady, and Helen, with a basket of washing under her arm, turned and walked to the communal wash-house. Twenty minutes later, and this time with wet washing in her basket, Helen trudged back towards the cottage. Now another sound came to her ears: a faint drone, no louder than the persistent buzz of a house fly. It caught her attention and she studied the sky to the west. There it was: a lone speck in the sky; no larger than the fly of which it reminded her. Enemy aircraft? It was too soon for Helen to be sure. Instinctively, she backed towards Brooks Cottage, her eyes focused on it, hoping to be reassured as it neared her. The sound of the engine grew steadily louder and, as the plane neared the coast, it seemed as if it would pass directly above her.
Helen stepped on to the veranda, which ran along the seaward side of the property. The low roof and timber supports gave a false sense of safety; they shielded her a little from the pilot's sight. She kept her eyes fixed on the slender shape, with a boxy cockpit and gentle curves to the wing tips; how small it looked, how fragile, suspended there in the sky. Its colouring was a war-time camouflage of patchy grey with a splash of yellow to the underside of its wing tips and, as it tilted a little, Helen gasped and her hand flew to her mouth as she noted the swastika on its tail.
There was no longer any doubt that this was a solitary enemy aircraft. Where was it bound for? What business did it have to be here, flying over the Dungeness peninsular? These thoughts flitted through Helen's mind as the plane passed overhead and a black cross, edged in white, flashed above her. She realised the plane was low in the sky, much lower than those usually passing over. It was going quite slowly too, almost faltering, as if the pilot had some special interest in the area. What might he be wanting in this remote corner of Kent?
Then it was gone and, still pressed close against the tarred plank wall, Helen peeped around the corner of the cottage, following the intruder's progress while the roar of the engine still beat in her ears. A feeling of dread grew within her. It caught in her throat, pressing and blocking. It blanched the skin in her face, causing it to tighten over the cheekbones. The fear forced a moment of inactivity, and an image of Jack asleep in the pram became the only thing to fill the young mother's mind.
Barely imperceivable, there came a second engine noise. Not from the sky, but the ground. It was that clanking, steaming beast Hercules on her return journey. Helen frowned to see the enemy plane lower itself a little in the sky. The engine remained unseen, but in her mind's eye, Helen visualised the guns on the armoured wagons and the soldiers from the Somerset Light Infantry who traversed this length of narrow gauge track between Hythe and Dungeness.
Did the soldiers' hearts race, she wondered? Were their limbs flexed, poised to fire at the lone plane? Did the long barrel of their guns follow the Messerschmitt's progress as they kept it firmly within their sights?
Helen didn't hear a shot, she was sure of it. But afterwards she almost convinced herself there must have been one. How else could it have happened? And however much she tried to put the events in sequence, she couldn't. It was all too fast, too unexpected.
An almighty scraping crunch of metal became the only noise to be heard. Then the ear-splitting sharp smash of the wing-tip skimming the ground. Helen was racing now (how did her legs carry her?) to the concrete track. The Messerschmitt up-ended; it flipped, spun with its underbelly showing, then righted itself as it smacked down on the shingle. Yet it was not “right” – this creature should be in flight, not smashed upon the stones.
In the aftermath of the twisting, spiralling, drunken dance, there came a new gut-wrenching sound as metal was torn from metal, rivets released their hold and the plane gave up the fight to stay whole. Helen almost felt the pain searing through her body as one wing separated and began its own erratic dance across the shingle before flopping in the throes of death and giving a final shudder.